How to reach the Convention Center Het Pand

Most international trains (including both the Thalys and the Eurostar) arrive at the train station ‘Brussel-Zuid/Bruxelles-Midi’. Each hour, there are several trains that pass this station and stop at ‘Gent-Sint-Pieters’ as an intermediate destination. The trip by one of the direct IC trains takes about 35 minutes (except for the last train of the day; in that case the trip takes about a small hour). For more information, consult the route planner of the Belgian Railway Company. On how to get from ‘Gent-Sint-Pieters’ to the conference venue ‘Het Pand’, see section 5.

Ghent can be easily reached by car as two European motorways (E17 and E40) intersect at Ghent. Parking space in the neighbourhood of “Het Pand’ can be found by following these directions:

Follow the directions to ‘Gent / Gent Centrum’ on the freeway. Once you are off the freeway, follow the ‘P-Route’ which goes along the major parking lots in Ghent. The parking lot P7 (‘Sint-Michiels’) and P8 are closest to ‘Het Pand’, other options are P6 (‘Center Parking’, located in ‘Korte Meer’) or P5 (‘Kouter’).

Parking lot P7 Sint-Michiels”  is located at 50 meter from “Het Pand’. Take the exit ‘Onderbergen’ and you come out in the Wilderoosstraat, opposite ‘Het Pand’.

An alternative parking is P8 Ramen. From here it is approximately 5 minutes on foot to ‘Het Pand’.

From parking lot P6 (‘Center Parking’): go left in ‘Korte Meer’, take the first turn left (‘Voldersstraat’), continue along ‘Hoornstraat’, pass the bridge ‘predikherenbrug’ (from the bridge you can see ‘Het Pand’ on your right), go through the ‘Jacobijnenstraat’ and finally turn right in ‘Onderbergen’. ‘Het Pand’ is located 25 m further at your right hand side.

From parking lot P5 (‘Kouter’): take the exit at the side ‘Opera/Gerechtsgebouw/Veldstraat’ on go through the ‘Zonnestraat’, then follow the tram tracks past the ‘Veldstraat’ and the bridge. Turn right at ‘Onderbergen’. You will see ‘Het Pand’ at your right-hand side after about 200 m.

A good tram network is present in Ghent to bring you from the station to the city centre and “Het Pand”.

From station Gent Sint-Pieters, you can take tram 1 (every 6 minutes) from the tunnel under the railway station and exit at “Korenmarkt”. Cross the river ‘Leie’ via the bridge ‘Sint-Michielshelling’. Turn around the Saint Michael’s church. Het Pand is situated next to the church. 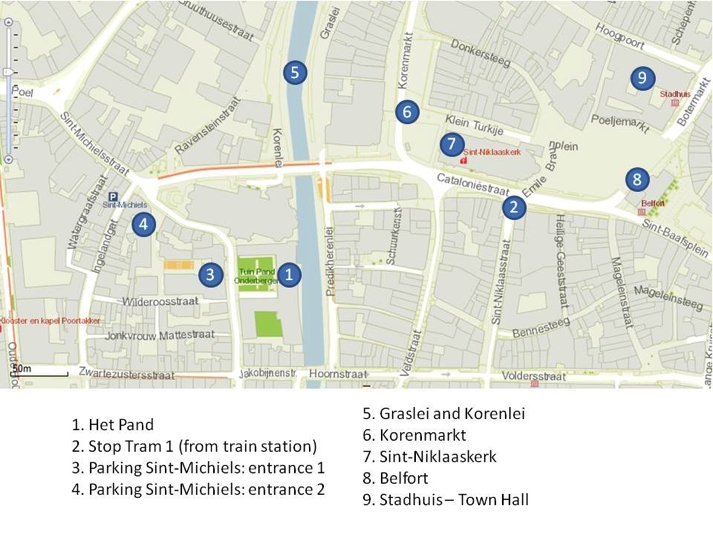 Het Pand is an old Dominican monastery located in the heart of the city on the banks of the river Leie, near the medieval port with the guildhalls as its remnants.

The year 1228 is considered to be the official date of establishment of the monastery in Ghent. In 1473 Margaret of York, spouse of Charles the Bold, laid the first stone of the street wing or library wing, which was the most important extension of the monastery. The Iconoclastic Fury of 1556 brought hard times for the building. The Calvinists threw all the library books in the Leie. After a brief period of peace, in 1578the Calvinists took over the city again. The monastery was used as a Calvinist university until 1584. In 1796, after the French Revolution; the monastery was closed and sold in lots. In view of the world exhibition of 1913, some restoration was done at the Leie front in 1912.

The University of Ghent acquired the building in 1963 and uses it as its cultural and convention center. Works were started in 1971 and accomplished in 1991. 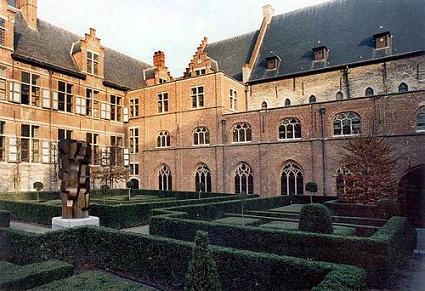 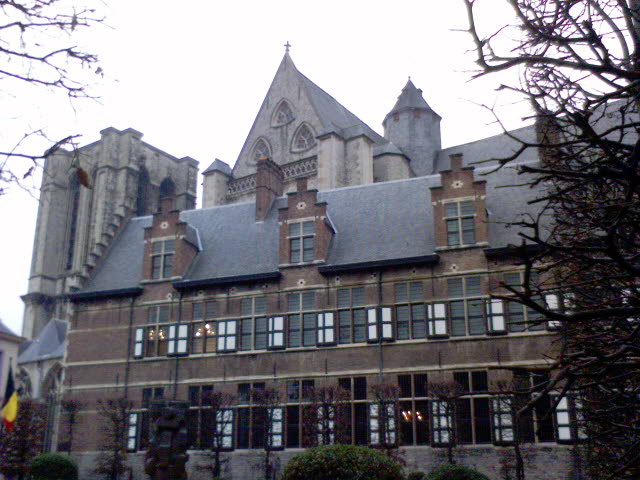 Gent (Ghent) is one of the oldest cities in Flanders, the Dutch speaking northern part of Belgium. It is located at the confluence of the rivers Schelde and Leie. Its name is derived form a celtic word for mouth, and it is known that the area was already inhabited in prehistoric times. Through the Middle Ages, it was among the most important economic centres of Western Europe.

The city of Ghent is a blossoming, vivid and historical city. It is known as one of the most authentic historic destinations in the world. However, this does not mean that  historicity is all the city has to offer. It has several interesting museums, nice and funky pubs and stylish restaurants. The Lonely Planet rated Gent in the top 10 cities to visit in 2011 and describes it as: “Here’s a secret within a secret: Ghent might just be the best  European city you never thought of visiting, in a country that continues to be criminally overlooked. […] Here hides one of Europe’s finest panoramas of water, spires and century-old grand houses.”

If you prefer a more alternative guide to Ghent, then here’s The Guardian’s Alternative City Guide to Ghent and some Reader’s travel tips. 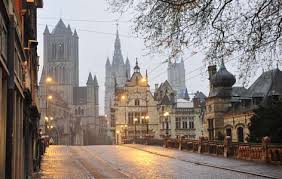 The view from St Michael’s bridge

The Graslei: part of the old harbour, with guild houses and warehouses along the river Leie 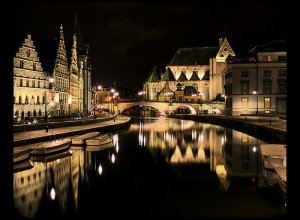 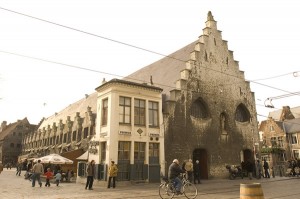 The Gravensteen: medieval fortress of the Counts of Flanders

Links to sites about Ghent, Flanders and Belgium

Faculty of Arts and Philosophy